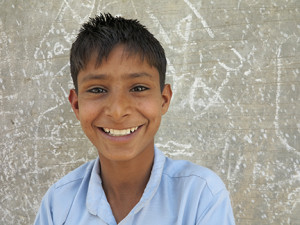 To most eight year olds who are heading to play in the lush green fields surrounding the DIL Subodero School in Khairpur, Akash sounds like an old man.

“I have to make sure I’m at the shop for the second shift; I need to save up a lot of money to get my brothers out of the orphanage.”

Akash was three when his father died. His mother later re-married, and abandoned her three children. Akash’s uncle enrolled his two siblings in an orphanage in Larkana, but when he came for Akash, his father’s former employers offered him a better deal.

“My father used to work in a shop, and the owners said, ‘Leave Akash here. We will raise him and he can work in the shop and earn and he can live here.’ I was lucky. My brothers in the orphanage are always hungry,” he explains.

Noticing the fraying fabric and torn straps on his sandals, Akash draws his feet back under the chair he is sitting on, out of view, and says, “Sometimes I only give my brothers Rs 300 ($3). I don’t always have that much to leave with them; sometimes I have to buy chappals (sandals).”

It’s been a while since the school bell rang and the courtyard cleared out. But there is a girl standing a few feet away, looking in Akash’s direction, tugging at her headscarf as the wind undoes the flimsy knot under her chin, and her head becomes bare.

“I can take your books home and keep the food covered for you?” she offers. He nods and casts a grateful, half-smile in her direction.

“That’s the owner’s daughter. She is my special friend; we talk when I am sad.”

Akash falls silent for a few minutes. When he speaks again, he is enthusiastic about the future.

“She gives me good advice. She says when I finish school I can be an officer in a government office, and then I am going to buy a house, and then my brothers will be free. I hate to leave them in the orphanage, but right now I have nowhere to put them. Magar main mahnat karta hoon, kamata hoon, I will make it happen.”

The eight-year-old cuts a forlorn figure against the dusty streets flanking his shop, his shirt collar worn out by too many washes. And despite his relentlessly upbeat attitude, there are times in the day when his resolve crumbles.

Two older boys, still in uniform, run up to Akash, clearly pleased to see him. He smiles at them and continues talking.

“But when I graduate from tenth, I will be an officer, and I won’t be needing kharchee (spending money). I will have a big income, and I will buy a house…”

Children like Akash deserve quality education that empowers them with the skills and knowledge they need to change their lives and the lives of those that depend on them. Help DIL provide quality education to 21,000 children across Pakistan, many of whom live on the borderlines of abject poverty like Akash. Learn more at www.dil.org.

View all posts by  ›  teachkids

This site uses Akismet to reduce spam. Learn how your comment data is processed.

WHY DIL IS DIFFERENT?

Focus on Girls’ Education: Over 65% of DIL’s student population is female. The national literacy rate for women in Pakistan stands at 38%.

Addressing the Needs of Rural Educators and Students

Monitoring and Evaluation: The key to the success of DIL’s projects is a robust monitoring framework and complete financial transparency.