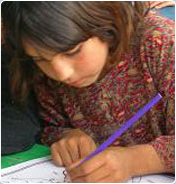 “I am Haseena Luk from Chutto Faqeer Luk and I am 17 years old. I have been fond of education since childhood. However, there was no school in our village and I was not allowed to travel to any nearby city or town to seek schooling. Through fellow villagers, I became aware that a school was going to be established in our village. There was not a single literate young woman who could fill the role of teacher so one was appointed from a nearby village.

One day, I was playing in the street when the teacher passed by. She asked me why I was not in school. I told her I was fatherless and poor and my mother was unable to purchase books or afford my education. My mother married my father, a 55 year old man, when she was only 14. He died when he was 62 and my mother ended up shouldering the responsibility of five children. She supported us by laboring in the fields during cotton-picking season.

My teacher came to my home and met with my mother in order to discuss my education with her. My mother again refused and disclosed poverty as the only reason. My teacher assured her that full assistance would be provided and she would have no expense. She agreed and gave me permission to attend school. I proved to be a good student. I often grasped things quicker than other students and I was made class monitor. My teacher often asked me to help teach my classmates.

After junior school, I got admission in Sojhro Model School Sagyoon and continued my education. Often I achieved first position in class. My teachers taught me with love and patience. When I entered Class 7, my mother arranged my marriage to a 50-year-old married man who had children older than me. I cried and refused to go through with the marriage, but nobody listened to me.

When my teachers found out, they tried to stop my mother, but she refused. She said that she too was married to an old man at a young age, so why shouldn’t her daughter? My mother argued that she was not willing to let her daughter get educated because literate girls find their own husbands. My teachers tried their best but my mother would say, “Haseena is my daughter and her future is up to me. Nobody has the right to interfere in our domestic affairs.”

I was married to the old man when I passed Class 7. After my marriage I remained persistently ill. I did not want to live any more.

Then one day Ms. Shamshad came to our village and I went to see her and cried a lot. She told me that situations could not be improved by crying. She said, “if that was the case, then why wouldn’t all women simply cry once and be rid of their problems? Indeed this is not the remedy. We should face our issues with a smile and manage them with courage.” She made me realize that I was literate, unlike other girls in the area and that I was smart and could handle the situation.

She advised me to improve my relationship with my husband and get his consent for further education. I listened and finally got him to agree and rejoined Class 8 at the DIL- IRC School in Sagyoon. During the school year I became pregnant and my fellow students and teachers were very cooperative, caring and friendly. When I was unable to sit in a student’s chair, teachers offered me their chairs and encouraged me to attend school regularly.

I attempted my last paper in the final stages of pregnancy and delivered a baby boy on the same day. I have now passed Class 10 in first division.

I am now the mother of two children. I am satisfied with my life because I can nurture my children better. I am very thankful to Development in Literacy for improving the lives of poor and vulnerable girls living in remote and deprived areas. I am grateful for your kind support.” 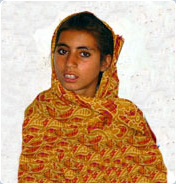 Located in an urban slum of Rawalpindi, Nai Abadi town lacks basic amenities such as a sewerage system, safe drinking water, proper roads, gas supply, health care etc. To survive, most of the inhabitants, including women and children, are involved in demanding daily labor. Hence, it took a lot of convincing on part of the teachers and DIL-ABES staff to get parents to send their children to the local DIL-ABES Community School, considered an oasis for school going children in this completely neglected town.

Parveen Bibi lives with her parents and nine siblings in village Nai Abadi. Her father, Faulad Khan, migrated from NWFP with his family in the summer of 2003. He supports his family by transporting supplies on his cart, while Parveen contributes to the household income by tending to the six family goats.

One day, soon after they migrated, a girl living in her neighborhood told her how much she enjoyed her school, including the extra-curricular activates that make learning so much fun. On returning home, Parveen pleaded with her parents to enroll her, who agreed only after she made a firm promise that she would not neglect her family duties. Parveen, a very good student, participates actively at school. She dreams of becoming a doctor someday so that she can change her families future. 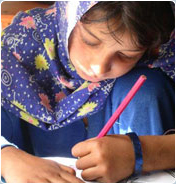 “When Meena Gul’s was a baby, her family suffered a tragedy. One day, relatives with whom the family had an ongoing feud walked into the house and killed her father, uncle and grandfather. While the incident was resolved between the family elders, they neglected to compensate Meena Gul’s mother, who now faced the frightening prospect of supporting two children on her own.

But Meena Gul’s mother vowed that not only would she financially support her children, she would also ensure they attend school. She went to work in people’s homes, tending to their cattle and doing hard labor. She sent Meena Gul and her brother to the government school far from the village, where they received little attention from the teacher.

The family was therefore thrilled when the DIL school opened in nearby Zarif Khan with attentive and dedicated teachers. DIL teachers speak very highly of Meena Gul’s mother, saying she has never put her children to work. Meena Gul and her brother follow their mother’s example, by working hard and excelling at their studies. One day, they hope to use their education to take care of their mother, the same way she has taken care of them.”